The name “ Moret-sur-Loing ” is inseparable with that of Alfred Sisley. He was an impressionist painter from the outset of the movement. From an English family in Paris, he lived in Veneux-Nadon (now Veneux-Les Sablons) and Moret-sur-Loing for about two decades.

He began exploring and painting the local area in his early years. In 1863, Sisley and friends he met at the studio of Charles Gleyre, painter and professor at the school of fine arts – Auguste Renoir (1841-1919), Frédéric Bazille (1841-1870) and Claude Monet (1840-1926) – would begin to work outdoors (“ en plein air ” or “ sur le motif ”), in locations such as the forest of Fontainebleau, Barbizon and Marlotte, only a dozen kilometres from Moret.
They were all inspired by the English painters Constable and Turner, whose work Sisley had become well acquainted with following several stays on the other side of the Channel, as well as the Realist movement in France, in particular Gustave Courbet and the master landscape artists of the Barbizon school, Corot (1796-1875) and Daubigny (1817-1878). The small group sought to innovate, going against the flow of Academic art, by reproducing the specific ambiance of a real place, in accordance with one of the precepts of Corot: “Never lose sight of that first impression by which you were moved”. After the forest of Fontainebleau, the favourite subject of Sisley and his friends was unquestionably the Seine and its tributaries. In 1866, Renoir and Sisley hired a boat to paint the river up close, from totally new angles. In the spring of 1874, along with Monet and Renoir, as well as Cézanne, Pissaro, Degas and Berthe Morisot, Alfred Sisley exhibited his paintings in the studio of photographer Nadar in Paris, on the fringe of the official exhibitions. 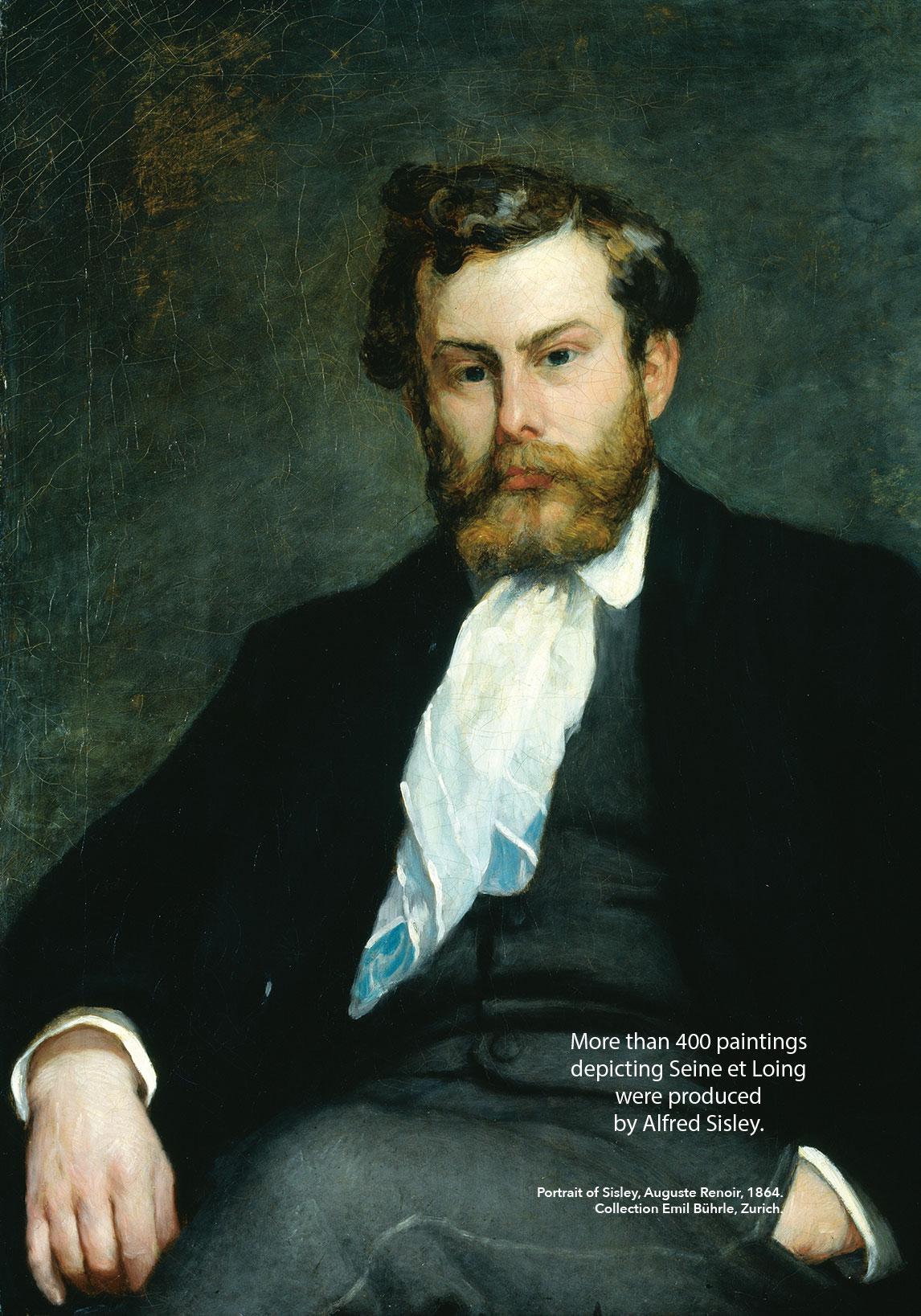 Did you know? "Sur le motif"

” Sur le motif ” is a French term used to describe a painting done often outdoors, as opposed to working from a sketch for example. It involves painting outdoors, in nature, working directly with the subject, often a landscape, as the pre-impressionists and impressionists did, armed with their easels and brushes.

It is this event that would go down in history as the very first impressionist exhibition. Sisley went on to take part in many events related to the movement. Despite the support of the collector and dealer Paul Durand-Ruel, success eluded him during his lifetime. The ruin of his family, following the Franco-Prussian war (1870), obliged him to live more modestly. He left Paris for Louveciennes, then Marly-le-Roi, Sèvres and, lastly, Veneux-Nadon and Moret-sur-Loing, where he lived at 19 Rue Montmartre until his death in 1899. Throughout his life, he painted the places where he lived and drew his inspiration. Landscapes represent almost all of Sisley’s body of work. While nearly a thousand paintings have been attributed to him, more than 400 were done in Seine & Loing, immortalising the sites of Moret-sur-Loing, Veneux-Les Sablons, Saint-Mammès and Thomery.

t the seventh impressionist exhibition in 1882, of the 27 paintings exhibited by Sisley, 26 depict the local area. He relentlessly explored and painted the orchards, the rivers and their confluences, boats, village streets, the station and church of Moret, always “ sur le motif  ”. In the manner of his friend Monet, he produced a series of 14 paintings of the village church at different times of day, in order to study light variations and effects. He established his style and palette here, during the last two decades of his life. His talent for capturing changes of light, the nuances of the sky and clouds, and the wind blowing in the trees, lend his works amazing charm and joyfulness. Sisley, who devoted himself body and soul to painting throughout his life, may not be the most well-known, but is now considered to be one of the greatest landscape artists and the most purist of the impressionists. “ Sunrise at Moret-sur-Loing ”, “ Poplars at Moret-sur-Loing ”, “ The Loing at Saint-Mammès ”,
“A Corner of the Woods at Sablons ”… These compositions are among the greatest impressionist masterpieces and are exhibited at the most prestigious museums in the world.

Impressionism is a French art movement from the second half of the nineteenth century.

The term used to refer to this major movement was coined by art critic Louis Leroy in a satirical article about Monet’s painting ” Impression, Sunrise ”.
It began as a group of artists with a shared desire to depict real, everyday life, rather than classical subjects and scenes. They used pure colours, far from the dark shades advocated in academic painting. By juxtaposing touches of colour, they came up with a painting technique that satisfied their desire to focus on sensations, impressions and moments. While impressionist works are now admired, they caused a scandal at the time.